Many of the most beautiful birds in the world are so rare that people don't even know they exist. Birds are among the most colorful animals on Earth, which is part of what makes them so pleasing to the eye.

Thanks to the unique characteristics of their plumage, many predator's eyes do not perceive birds as being colorful. This allows birds to develop vibrant patterns used for mating rituals.

It's important for us to take the time to appreciate these amazing creatures so that we think twice before encroaching on their habitats.

10 of the Most Beautiful Birds in the World

We chose these birds based on popularity and uniqueness, with a touch of our own personal preference. So without further ado, here are 10 of the most beautiful birds in the world! 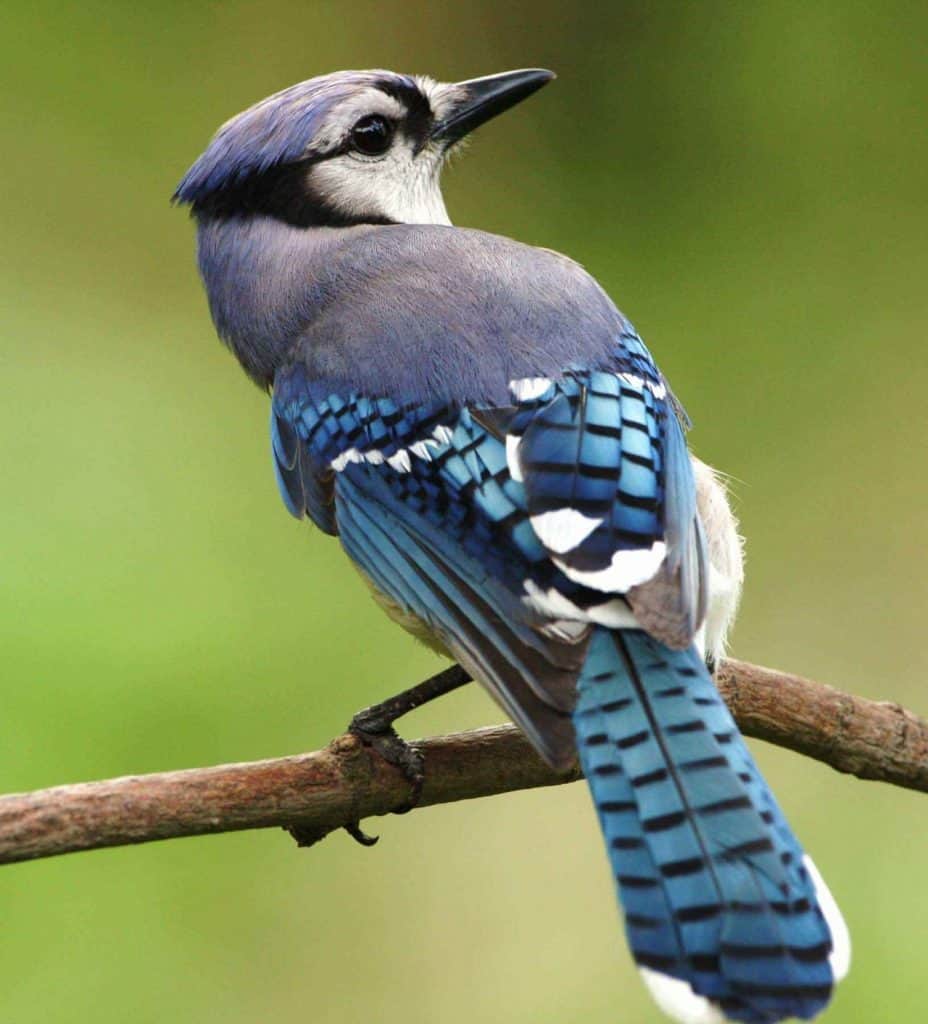 Blue jays have handsome blue, white, gray, and black plumage, which lands them among the most beautiful birds in the world.

Although the males are larger, they look very similar to the females. Therefore, the surest way to tell them apart is by observing their behavior.

For instance, males do not incubate eggs and will spend more time gathering food to return to the nest.

Blue jays are native to North America. There you can find them wherever there are forests nearby.

However, they are most common in temperate climates where oak trees also flourish. They prefer the edges of forests over dense woodland.

Their diet consists of insects, nuts, seeds, and grains. On rare occasions, they will also steal eggs from the nests of other birds.

Blue jays are extremely intelligent birds who live in complex social groups. They have the ability to imitate the calls of other birds, and captive blue jays can even mimic cats and humans.

Because they like to bury their acorns for later feeding, they are believed to be the primary reason that oak trees are so plentiful in North America. 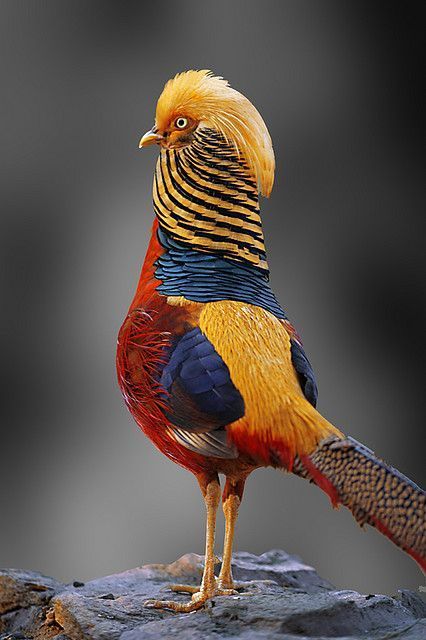 Golden pheasants are found mainly in central China but are well known for being one of the most beautiful birds in the world.

The males are considerably larger than the females. They are also brighter in color, with a golden crest, neck and lower back. They have a red chest and underbelly, blue and green upper back, and a long brown tale.

In contrast, the females are thinner and duller in appearance with various shades of brown and yellow.

Golden pheasants live mainly on a diet of bugs, berries, and seeds. They prefer to live deep in forests and spend most of their time foraging on the forest floor. The best place to watch for them is within small clearings, but you should do it early in the morning while they're out and about.

They are not graceful fliers, which may be why they spend so much time on the ground. However, they sleep and nest in the trees at night to avoid predators. 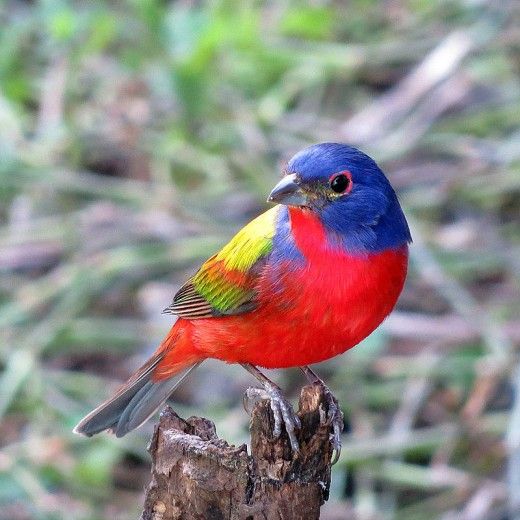 Painted buntings are a type of finch native to the southern United States, although you won't find them on the west coast.

They are among the most colorful species in North America and certainly one of its most beautiful birds. You'll have to look hard to find them, though because they are tiny! The best way to spot a painted bunting is by setting up bird feeders.

The females are bright green; much brighter than your average bird. Adolescent males start out this way but gain more colors once they reach maturity.

Painted buntings tend to live on the edge of forests and grasslands. They forage for food in the fields and mate in dense shrubbery.

They eat mainly seeds but will also feed on insects such as beetles and grasshoppers during mating season. 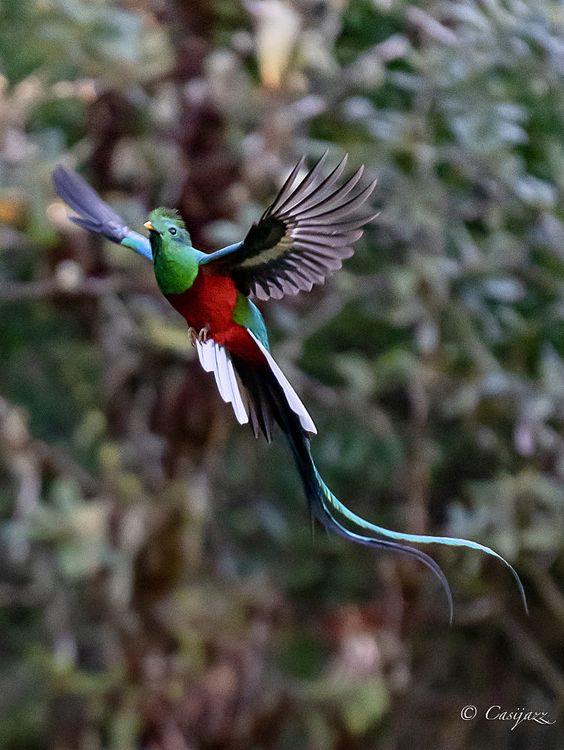 Quetzals make their home in the mountainous tropical forests of Central America.

As such, their habit is under threat, and their population is decreasing. They don't breed in captivity, so it's important that humans take steps to prevent them from becoming extinct. Otherwise, we risk losing one of the world's most beautiful birds.

Male quetzals are incredibly colorful. They have vibrant green and blue plumage, a dark red underside and a rather unique tuft of green feathers on their head. They also have twin tail feathers which grow remarkably long.

While the females are decidedly less colorful, they are still one of the most beautiful birds out there.

Quetzals mainly eat tropical fruit that's similar to avocados. However, they are also skilled hunters and won't hesitate to munch on lizards, snails, and other small creatures. 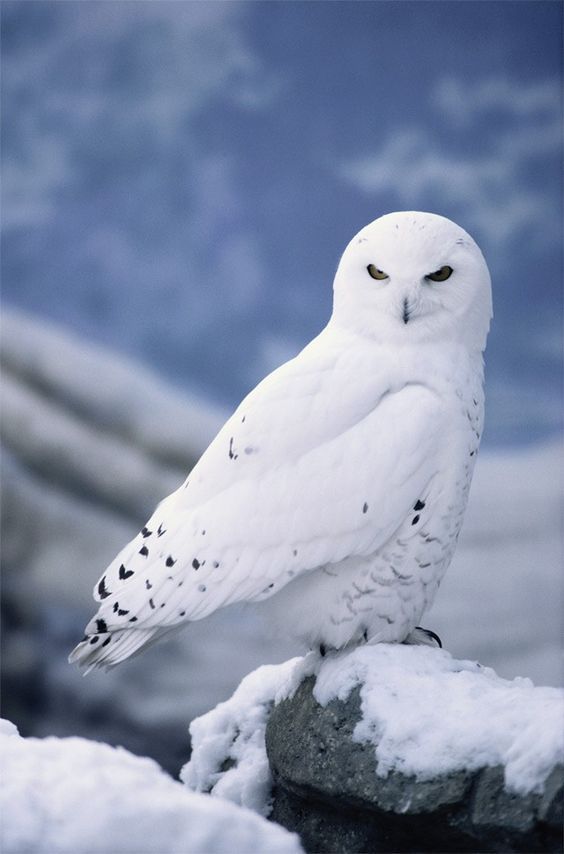 Everyone knows about Hedwig, Harry Potter's faithful snowy owl. So, it's no surprise that many fans of the series consider them to be one of the world's most beautiful birds.

Snowy owls live mainly in tundra biomes in Canda and Northern Eurasia, near lakes and the ocean. During the winter you'll be able to find them a little further south.

They prefer wide-open stretches where they can hunt small mammals, especially lemmings. Because these places are typically very flat, they tend to perch on humanmade objects such as telephone poles.

The males are usually almost all white, with a small amount of black or brown spots. In contrast, many females almost have more black than white. 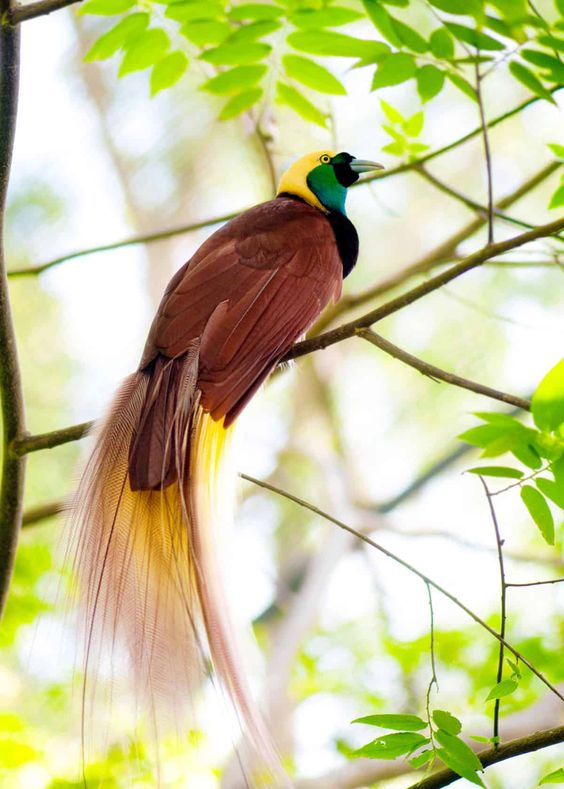 The greater bird of paradise is found mainly in southwest New Guinea and is undoubtedly one of the world's most beautiful birds. Existing on a diet of fruits and insects, they are well suited to the tropics.

Their bodies are entirely red, save for the long yellow and white feathers that drape down from their back as they perch in the canopy.

Due to their gorgeous plumage, there was a time in the early 20th century when people were concerned they'd go extinct from overhunting. However, nowadays their conservation status is "least concern," and you can easily spot them in their natural habitat.

Male birds of paradise are well known for their extravagant displays designed to attract females.

This particular species sits in the treetops, singing from dawn until dusk and rarely eating. Females are attracted to complicated melodies, as it signifies healthy genes. 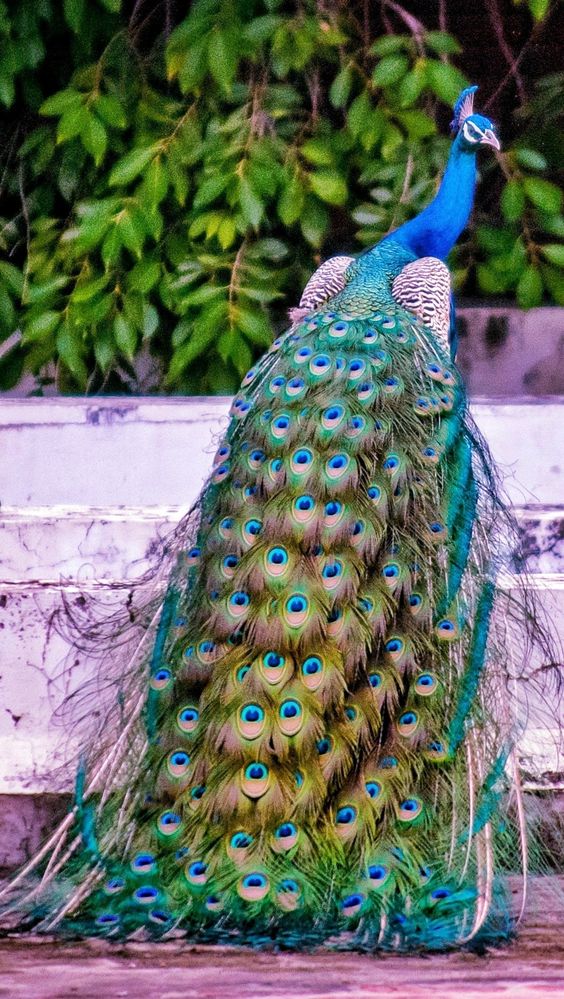 It's hard to talk about the world's most beautiful birds without mentioning the peacock. These are a favorite of every exotic bird enthusiast.

The word peacock refers specifically to males. Females are called peahens, and the gender-neutral term is peafowl.

The two main breeds of peafowl, blue and green, live in India, Sri Lanka, Myanmar, and Java. They tend to live near forests and will roost in trees.

The males are easily identified by their tail feathers, which fan out to display blue and green eye-shaped markings.

Of course, peacocks use these markings to impress peahens in the hopes they'll choose them as a mate. People often see particularly beautiful males with several females.

Peafowls are omnivores that eat mainly plants and insects, but sometimes small creatures. 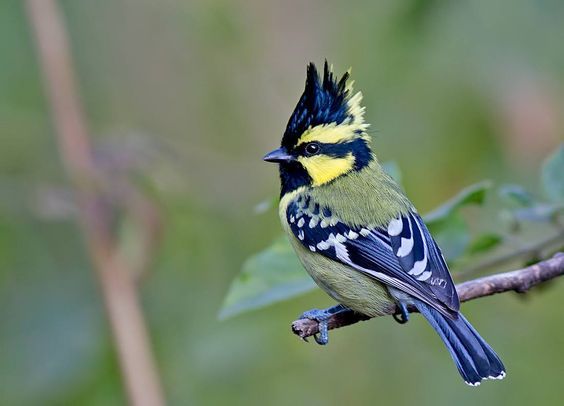 As the name implies, the Himalayan black-lored tit is native to the Himalayas in India. East Asia is full of the world's most beautiful birds, isn't it?

This tiny bird has yellow and black plumage. Its crest, wings, and forehead are typically black while the rest of it is yellow. Other species of tits have very similar patterns, such as the yellow-cheeked tit.

The black lored tit flies about the canopy feasting on insects, spiders, fruits, and seeds, and singing its sweet songs.

They use abanded woodpecker holes as their homes or make their own if they must. 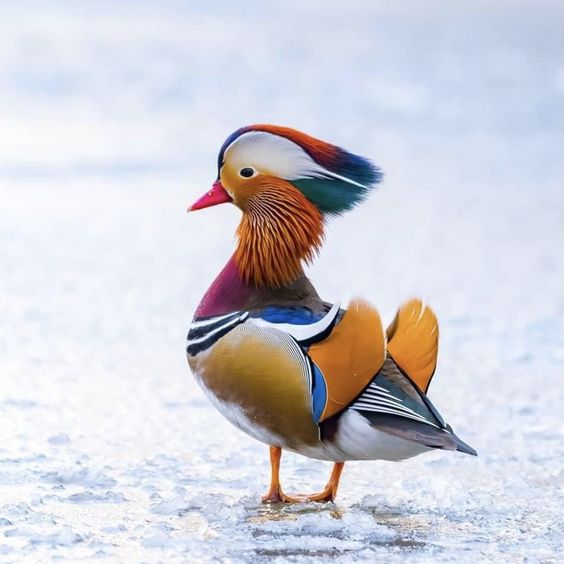 Yet another of the most beautiful birds native to East Asia, the mandarin duck is a sight to behold. Though its natural habitat is in China and Japan, small populations have been introduced in Ireland and the UK.

The mandarin duck's forehead is greenish-black, transitioning to red and purple at the back of its head. The sides of its head are white, and the cheeks are brown.

It has a maroon chest and a white belly, and the sides of its body are brown with black streaks. It also has very distinct wing sails with orange feathers.

Unlike most ducks, these ones nest in trees high above the ground. Shortly after the ducklings are born, the mother has to coax them back to the water. Once there, the father takes on the task of protecting them. 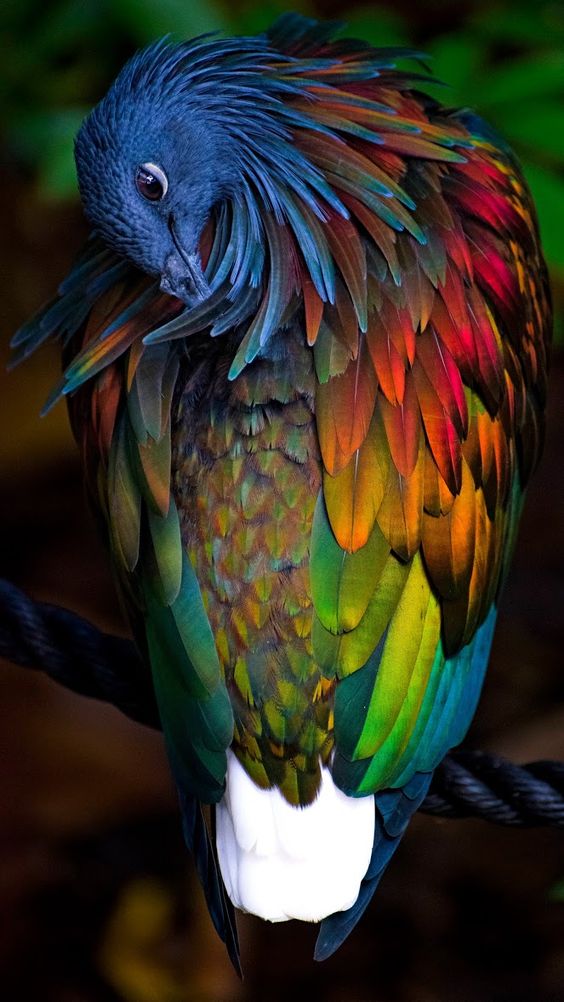 The Nicobar Islands are a relatively small group of islands in northwestern Indonesia. It's here, along with the nearby Andaman Islands that most Nicobar pigeons make their home.

You wouldn't expect a pigeon to make it into a list of the world's most beautiful birds. However, the Nicobar pigeon is unlike anything you've seen before.

Its plumage contains various mixtures of blue, green, red, yellow, and purple, and transitions neatly from one color to the next. The long neck feathers are called hackles.

Nicobar pigeons are nomadic birds that fly between Islands in large groups.

They are also the closest living relative to the extinct Dodo birds, which fell victim to overhunting. It's important we don't make a similar mistake with the Nicobar pigeon, whose conservation status is "near threatened."

Which Is Your Favorite? 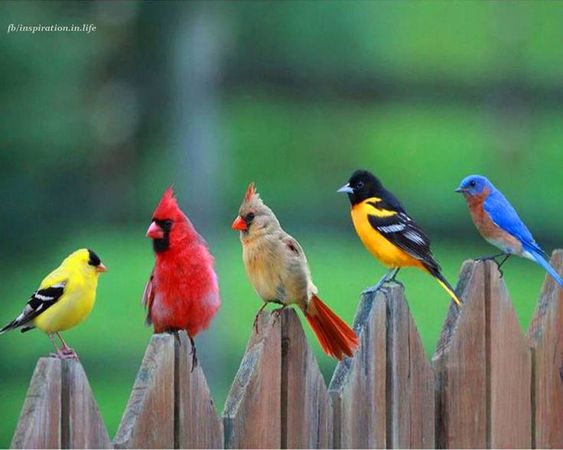 Of course, 10 slots isn't nearly enough room to talk about all the most beautiful birds in the world. There are still many more to cover at a later date.

Which bird we discussed is your favorite and why? What birds would you like to see in part two? Let us know in the comments below! Bird Watching Gifts For Anybody With An Avian Obsession The Best Heated Bird Bath to Place in Your Yard: Top 8 Picks What Do Birds Do When Their Nest Is Destroyed?